Information about the removal processes of the suspended substances-flotation

The suspended substances in waste water consist of organic and/or inorganic liquids and/or solids, insoluble in water.

Among the suspended organic substances we have animal and vegetal fats and oils, organic mineral oils and solvents immixable with water.

Also the microrganisms living in the superficial and waste waters, in more or less numerous colonies, can be considered as a suspended organic substance.

The main inorganic suspended substances are, for example, clayish materials and the various oxides, hydroxides and  metallic sulphures.

The liquid suspended substances commonly consist of compounds having a lower density than water and, as  a consequence, a tendency to go up to the surface (float) when the water is kept calm.

The microrganisms aggregated in more or less voluminous masses usually have a density just a little higher than water, therefore they tend to settle down.

The ascending or settling speed of the substances depends on several factors, one of them is the particle size.

If the particles are very small (size less than 1 Μm), we have very stable suspensions (collloidal suspensions) which, in the case of liquid suspended substances, are also called emulsions.

The main processes for the removal of the suspended substances are:

The choice of the process depends on the chemical-physical characteristics of the waste water and, particularly, on the nature, size and concentration of the suspended substances.

The almost complete removal of the suspended substances can very often be achieved only by combining more than one of the above-listed processes.

The flotation is a process which allows to take to the water surface both the suspended particles which tend to float freely (having a lower density than water) and the ones with a feeble tendency to settle.

On the contrary, the heavy particles settle on the flotation unit bottom and they are removed by a scraper.

The floating material is taken away by a special skimmer.

So with the flotation system it is possible to achieve a removal of the suspended substances which is generally higher and better that the one obtained with the sedimentation system, and this relatively more quickly.

The flotation is not only used for water clarifying, but also for the thickening of chemical and biological sludge.

The flotation is achieved by injecting air into water so that the air bubbles, coming into contact with the suspended particles, take them up to the surface.

The suspended substances, which initially have a lighter specific weight than water, will resurface more easily thanks to the further weight reduction (remember that, according to Stokes’ law, the ascending speed of the particles gets higher as their specific weight gets lighter and their size larger).

While the particles which have a heavier specific weight than water and the tendency to settle, after the air bubbles trapping or adhesion, may take a lower apparent density than water and consequently resurface.

In connection with this, the particles volume is very important because the quantity of air bubbles which can push the particles up depends on this size.

The coagulant reagents, which cause the particles agglomeration into large flocs, allow to increase the efficiency of the flotation system.

As stated above, the particles can also resurface thanks to the air bubbles adhesion to their surface, due to the effect of the superficial tension.

It must be also considered that in the flotation tank the air bubbles adhering to the particles tend to get larger during the resurfacing since their specific weight is reduced as the pressure decreases.

This causes a reduction of the specific weight of the system particle-bubble and consequently a faster resurfacing of the particles.

To obtain a high removal of the suspended substances, the air bubbles must be very small and uniformly distributed over the horizontal section of the flotator.

The second condition for a high removal is difficult to achieve when the air is blown in through some diffusers (even if they have a very small porosity), this is why the flotation with blown-in air (also said induced air flotation) is used only for relatively small size equipments.

Moreover the quantity of air required is considerable and, as a consequence, the power consumption is high.

Finally, since the separation of the floating substances is made by removing the thick layer of scum on the surface, you get a good separation, but with a high production of low-concentration sludge.

The DAF flotation is largely and more commonly used both for water clarifying and sludge thickening, while the induced air flotation is mainly used for in oil industry waste water treatment plants.

The saturation can be made according to one of the following options:

saturation of all the water to be treated

The first solution (A) is not much recommended for a waste water which contains oily substances or particles which tend to flocculate as the solids may clog the saturator internal part.

The aim of the solution B is to achieve the saturation of a part of the effluent.

In both cases (A and/orB) the saturator effluent is always sent, through a depressurization valve, into a flotation tank at atmospheric pressure. So the dissolved air is in over-saturation,  compared to the atmospheric pressure, and consequently there is a release of air in the form of small bubbles (30-120 Μm) which develop mostly in contact with the suspended substances (acting as bubbles developing centers) and remain adhered.

The quantity of air released in the tank depends on the saturation pressure P, on the water stay time in the saturator ts, on the temperature t and on the chemical-physical characteristics of the waste water.

The quantity of air released can be calculated by using the Henry’s law:

The constant H depends on the chemical-physical characteristics of the water and increases as t. is rising. Therefore the air solubility, just like the solubility of the other gases, decreases as P falls but also as t. rises.

The diagram shows the values of the air solubility meant as a mixture of n2 and O2 in distilled water at atmospheric pressure and at various temperatures. 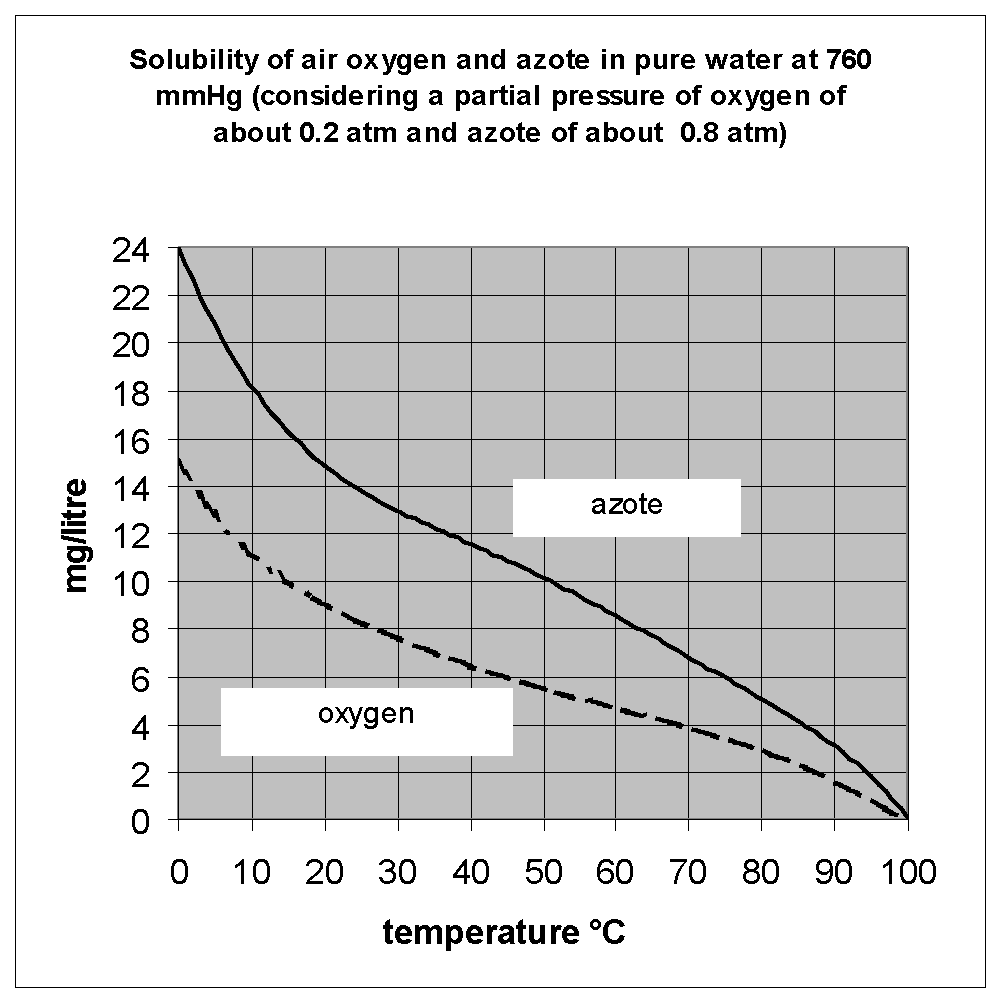 For a higher saturation pressure than the atmospheric one, the concentrations resulting on the diagram are to be modified in connection with the saturation absolute pressure.

If the contact time between air and water in the saturator ( ts ) is not enough to reach the equilibrium conditions, the quantity of air dissolved in water will be lower than the one shown in the diagram.

The degree of saturation ( f ) of water with air at a pressure P is determined by the ratio between the quantity of air actually dissolved into a litre of water at the pressure P and the air solubility at the same pressure.

The value of f is between 0 and 1 and depends on the following factors:

The stay time ts is given by ts=V/Q

V  = volume of the saturator

The value of ts is normally from 1 to 3 minutes.

The quantity of air released in the tank by the saturated water is:

p = absolute pressure in the saturator

The efficiency of the particles removal in the flotation tank depends on the quantity of air released, but also on the particles nature, size and concentration.

Q = water flow rate to the flotation unit in m3/h

TSS = total suspended solids in the water flowing into the flotator, measured in p.p.m.

As the ratio A/S changes, the particles resurfacing speed changes and, consequently, the removal efficiency too.

The ratio A/S is normally between 0.008 and 0.06 – from minor to major removal efficiencies.